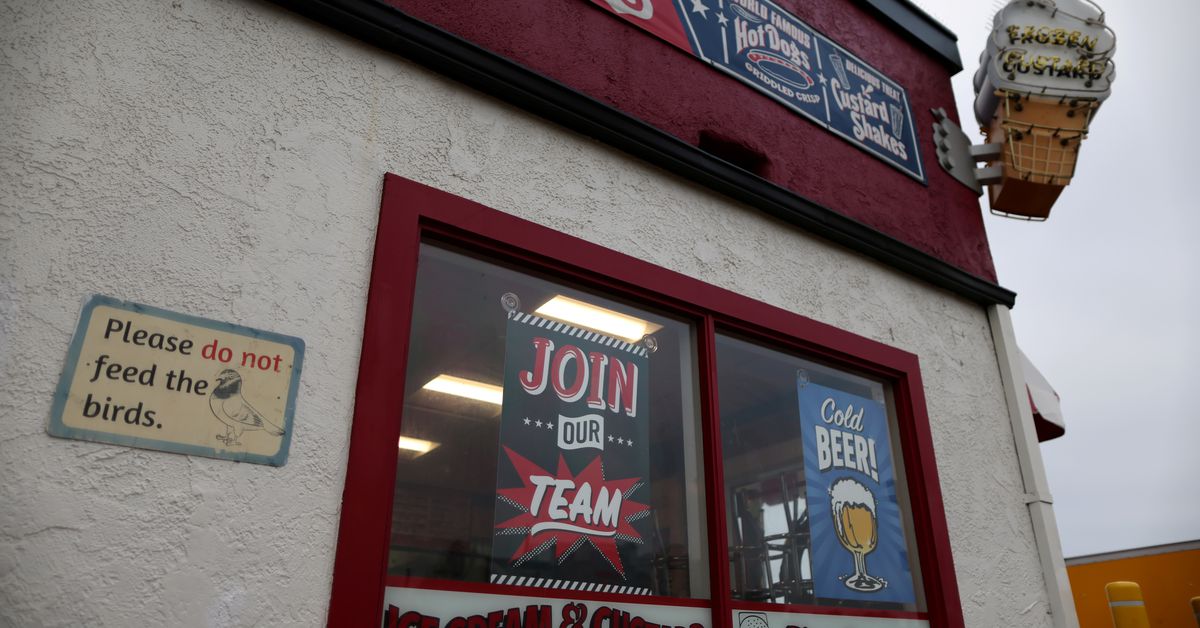 A restaurant advertises for employees after coronavirus disease (COVID-19) restrictions were lifted, on the pier in Santa Monica, California, U.S., June 22, 2021. REUTERS/Lucy Nicholson

July 1 (Reuters) – Rising COVID-19 vaccinations in the United States are driving the jobs recovery in the food and accommodations sector, but not in industries where workers can more easily do their jobs from home, a blog published Thursday by the Chicago Federal Reserve Bank showed.

The connection between jabs and jobs among restaurant and hotel workers is much stronger in the U.S. West than in the South, Chicago Fed economist Scott Brave and research assistant Stephanie Grove also found.

The study’s overall results make intuitive sense, as vaccinations protect both workers and customers, easing fear of infection and giving governments reason to ease up on limits that have hamstrung the leisure and hospitality sector from the beginning of the pandemic. More surprising, Brave said in an interview, was the regional variation.

“Higher vaccination rates are playing a role in supporting restrictions going away, and encouraging customers to return” to dining and travel, he said. In the South, he said, “there’s not as strong a connection,” possibly because those states reopened earlier and faster than other parts of the country. Vaccination uptake has also been slower in the South than elsewhere.

The next read on the U.S. labor market will come Friday, when the Bureau of Labor Statistics releases its June jobs report. Employment in food and accommodations is 2 million below its pre-COVID peak; that’s more than a quarter of the overall jobs hole since the pandemic began.

One percentage point increase in the vaccinated portion of the population translated to about 15,000 restaurant and lodging jobs, the Chicago Fed study found. In June, that would equate to 90,000 jobs gained due to vaccinations, it found.

By contrast, the study found, there was little connection between vaccination uptake and jobs in the finance and insurance industry.

Since April, when vaccinations became widely available and daily injections peaked at more than 3 million, the food and lodging sector added about 220,000 jobs each month. Vaccination rates may have been responsible for more than half of the gains in April and May, Brave said.

Daily doses have fallen since then, so the contribution of vaccination uptake to the June jobs figures has likely dropped as well, he said.

“At some point this won’t be the dominant factor,” he said.

Small Business Trends
We use cookies on our website to give you the most relevant experience by remembering your preferences and repeat visits. By clicking “Accept All”, you consent to the use of ALL the cookies. However, you may visit "Cookie Settings" to provide a controlled consent.
Cookie SettingsAccept All
Manage consent