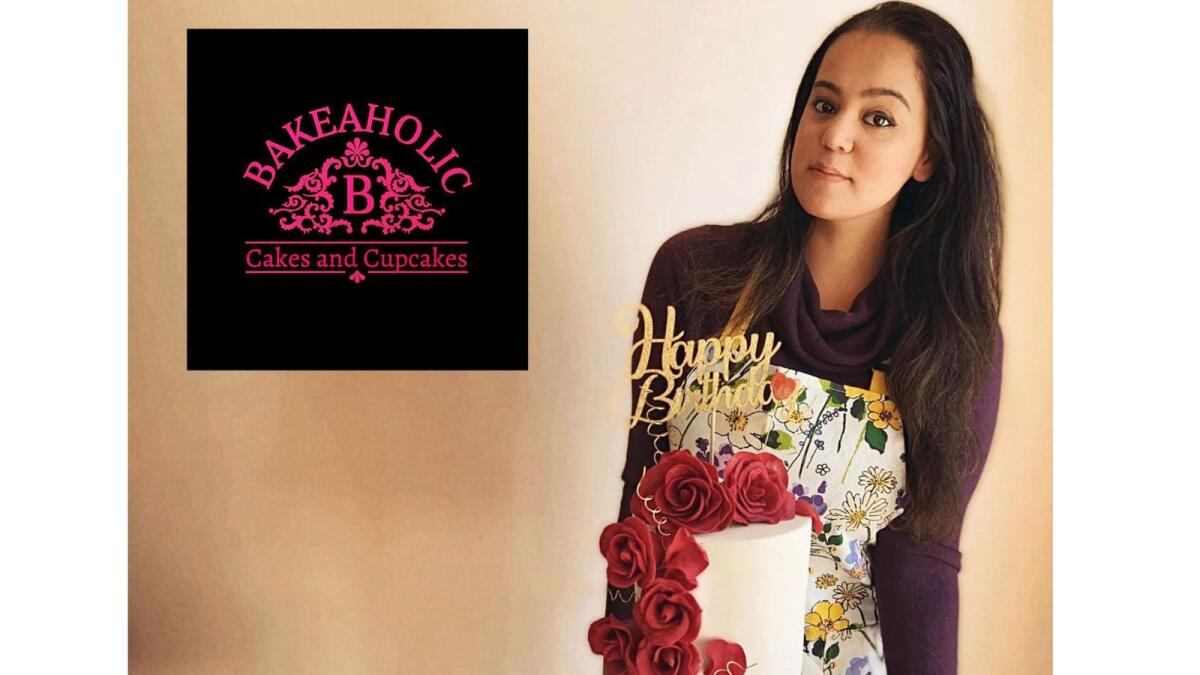 Growing up in Karachi, a city in Pakistan with a population of 16 million people, Bakhtawar Sadique never dreamed that one day she would be living 6,500 kilometres away in Monksland, Athlone, and owning a custom cake-making business that is suitably called Bakeaholic.

“In Pakistani culture, the girls in the family learn to cook from a young age, so I knew how to bake. But to bake professionally was definitely not something that was ever on my radar. I’m a self-taught cake baker and spent countless hours experimenting in my kitchen and learned the craft through trial and error. My driving force was to make the best looking and best-tasting cakes for my friends and family, and never thought people would pay me to make cakes and buns!”

Bakhtawar was raised in a traditional Muslim household alongside her four sisters and brother. Her dad was in the Pakistan Army while her mother ran a successful clothing boutique. She had planned on using the business degree that she had earned, to get a good quality job in Pakistan.

However, about 11 years ago, Bakhtawar left the bustling megacity of Karachi with its overflowing culture and customs for the city of Manchester, England, when she married Mancunian Raghib.

Bakhtawar lived in the Cheetham Hill area of Manchester for about six years with Raghib and had two young boys.

“When I lived in Manchester, I used to bake birthday cakes for my family and friends to keep myself busy at home. Once I plucked up the courage and exhibited my cupcakes at an Asian wedding exhibition. My samples went down really well and that experience gave me a much-needed confidence boost.”

In 2016, Bakhtawar took a much shorter trip across the Irish Sea from Manchester to Monksland, Athlone because her husband’s job required him to relocate to Ireland. She explains why the family picked Athlone out:

“Raghib travels a lot for work, and he had to be somewhere central, and Athlone literally is the heart when you look at a map. It was the perfect location. Neither of us had ever been to Ireland before and knew nobody over here. I was so lucky that my new neighbour in Monksland, Sandra Hewitt, is the most wonderful lady. She introduced me to lots of people in the community. My eldest boy was four and a half years old at the time, and he settled into the local school very well. I’m amazed by how much natural beauty there is in Ireland and can honestly say that I have seen more of Ireland than I ever did of England. Athlone is where I now feel grounded, I feel I belong here. Athlone is home now.”

Bakhtawar hadn’t planned on creating cakes to sell but had been persuaded to do so by her friend Sandra who knew that Bakhtawar had the talent and flair. Putting her money where her mouth was, Sandra became the first paying customer by ordering a cake for her daughter’s birthday. Through word-of-mouth, people heard that Bakhtawar could bake wonderful birthday cakes and that gave her the initial marketing boost that she needed.

A Facebook page that had been set up by Bakhtawar for the Asian wedding event was reactivated and Bakeaholic was back!

“I was probably getting about one or two orders a month in the early days, and I realised that I could comfortably bake much more. So, I secured a regular stall at the Athlone Springs indoor market every month, as well as, stalls at events at both the Hodson Bay Hotel and Radisson Hotel in Athlone. Promoting myself at the indoor market and events gave people an opportunity to sample the cakes for themselves. Also, I could personally reassure people that my little home-caking making business was fully registered and compliant with the necessary Health Service Executive (HSE) regulations. The promotion and marketing were very worthwhile because I had an influx of customers which gave my business the traction it needed.”

The first cake that Bakhtawar baked was a fresh cream cake. She has always preferred banana bread and fresh cream cakes. At home, her family are not big fans of buttercream or icing. The first cake she made to order was a Minnie Mouse one, which was followed by a farm-themed one. Both cake recipients were delighted with the novelty factor and attention to detail

Bakhtawar creates all the cakes herself and likes it that way. “Two restaurants asked me to bake for them, but I didn’t want to. I like my niche. I’m a cake decorator and don’t see myself as a mass producer. I’ve never liked mass-produced cakes. I love the craft of creating something from scratch that has the wow factor. If my workload is too heavy, I simply cut back. I have a part-time evening job at an insurance company, my baking is done at the weekends, and I’m a full-time mum! Nothing ever leaves my kitchen unless it tastes and looks good, and I don’t want to ever lose sight of that!”

Two of Bakhtawar’s sisters are fine artists, and she too believes that she inherited an artist streak from her creative mother. The presentation of her cakes is equally important as the taste, and she is more than happy to customise every piece of cake art that leaves her kitchen oven.

“Design and taste as key as far as I’m concerned. If you come to me and say that you don’t like buttercream but prefer fresh cream, I’d be OK, I can customise it for you. If someone desperately wants a Manchester United theme on a fresh cream cake, I will do that too, whereas other people wouldn’t.

“One customer wanted a cake shaped like a suitcase with a Ralph Lauren bag on top of it. She handed me the bag and told me to copy it! I had to make that cake completely out of chocolate.

“Then another lady came in and said, can you make a 3D Rose with petals flowing out of it in chocolate. I live for the craziness and quirkiness of people’s ideas.”

“I did my first LGBTQ cake last year. It was a lovely experience. One of the grooms was overseas but knew me through his family. He said that he wanted to give his partner his heart. So, I gave him ideas involving pretty love hearts. But he wanted a caked shaped as his anatomical heart with pretend blood and guts! It was a creative challenge, but I had so much fun making it for him. I had never done anything like that before, ever. I’d only ever done pretty wedding cakes!”

Business Ideas 2022
We use cookies on our website to give you the most relevant experience by remembering your preferences and repeat visits. By clicking “Accept All”, you consent to the use of ALL the cookies. However, you may visit "Cookie Settings" to provide a controlled consent.
Cookie SettingsAccept All
Manage consent