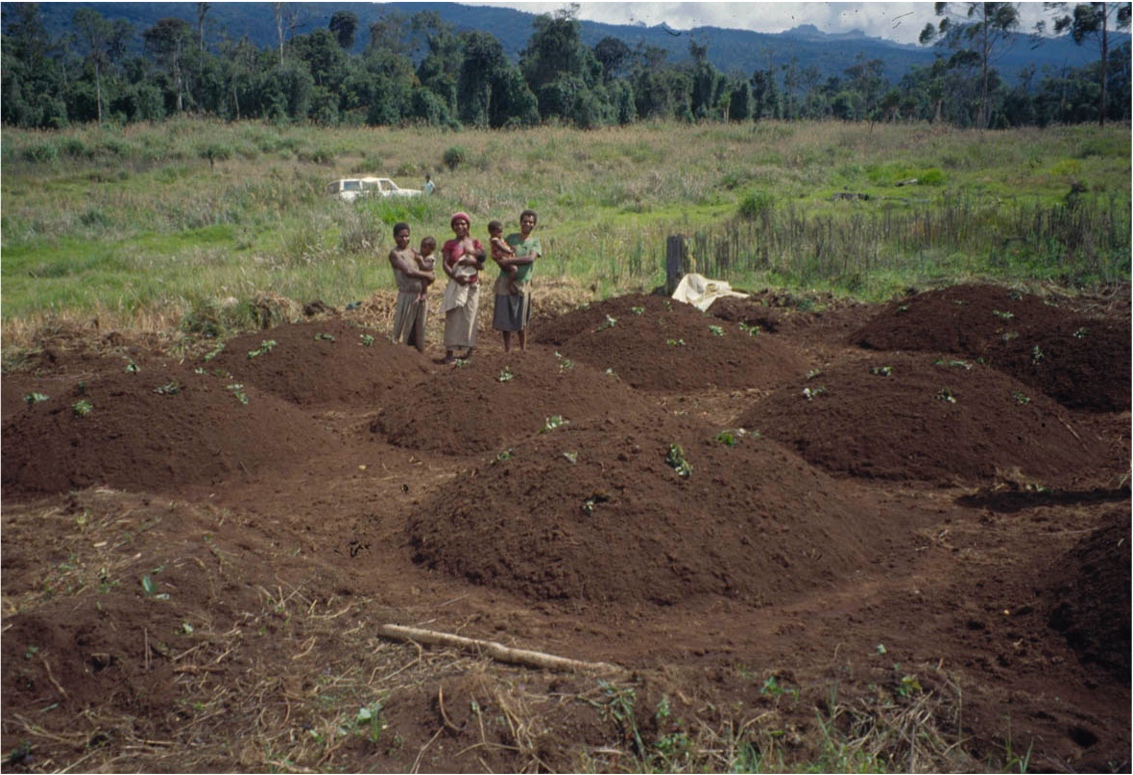 In their blog ‘PNG: the hungry country’, Manoj Pandey and Stephen Howes have raised an important topic – food insecurity. But I disagree with their conclusion that in Papua New Guinea (PNG) ‘hunger is widespread’ and that ‘many people are simply not eating enough’. There are, however, a few locations where people are chronically short of food; localised food shortages do happen occasionally; and widespread severe food shortages do occur, typically a decade or more apart. Importantly, both protein and energy intake of many small children is limited because of the bulky nature of traditional energy foods.

The focus of this blog is on rural villages, where over 80{93dc336ded79d9c19a7fd46b704c562746eddfc4ab513b7b2ee0a4a79ff98b60} of the PNG population resides, and on the consumption of carbohydrate-rich energy foods such as root crops, sago and banana. This was the focus of my 2000 publication on food security in PNG, quoted in the ‘hungry country’ blog. There are also issues with the quality of the diet of many Papua New Guineans, including low intake of protein, oils/fats, iron, iodine and vitamin A, but these are not addressed here.

By way of background, I have been continuously engaged in agricultural development, research and training in PNG for many years, seeking to understand the extent and causes of short-term and long-term food shortages. The causes of food shortages in the PNG Highlands were examined in my doctoral research.

Over the past 10 years, I have visited hundreds of food gardens in rural and remote villages, and discussed food issues in depth across many parts of Hela, Southern Highlands, Western Highlands, Jiwaka, Eastern Highlands, Morobe, Central, Gulf, New Ireland and East New Britain provinces. Part of this period included widespread food shortages caused by drought and frost in much of rural PNG in 2015–16. However, in non-drought periods, I rarely encountered locations where carbohydrate food was insufficient over wide areas.

Surveys can generate misleading information on certain topics, including food intake. From my own experience, villagers sometimes say that food is scarce. However, on further probing, it is apparent that their favourite food is not readily available, so they are eating more of a less favourable food. This is particularly the case where there has been a change in foods – for example, where taro or yams have been replaced with more recently adopted foods such as sweet potato, cassava or imported rice.

People in the PNG Highlands have also tended to inflate survey responses. For example, in the 2015–16 food shortages, phone surveys conducted on behalf of the World Food Programme reported that people had no food in Gumine District in Simbu Province. Several of us queried this based on information from our contacts in that area. My colleague Matt Kanua led a team to the area and found that, as we suspected, food was somewhat scarce but people were not starving. A good example of the more detailed research required on food supply is that given by Dr John Sowei in his response to the ‘hungry country’ blog. Food intake studies based on recall by informants are difficult to conduct and are best done by highly experienced nutritionists or agriculturalists.

There are a few rural locations where food is chronically scarce, and this is normally addressed through trade. People on some small islands obtain food from villagers on nearby larger islands in exchange for non-food items. On the PNG mainland, and on some larger islands, people obtain food from those living in other agro-ecological zones – that is, where rainfall patterns are different and food is easier to grow. However, there are a few places, such as the Carteret Islands east of Buka, that are too distant from larger islands to trade for food and food is chronically short.

Food is sometimes scarce for other rural villagers. The reasons for short-term shortages vary, and include extended periods of exceptionally high rainfall, which prevent access to food gardens; lack of garden activity for long periods following a series of deaths in a community; and an inability of men or women to contribute to food production because of illness, extended absences or other reasons.

More prolonged and widespread food shortages are caused by climatic extremes (drought, frost, excessively high rainfall) and, in the PNG Highlands, cycles of particularly high then particularly low planting rates of the main staple food, sweet potato. Major droughts (and repeated frosts above 2200 m altitude) have caused serious shortages, both historically and in recent decades. Over the past 50 years, these have occurred in 1972, 1982, 1997–98 (the most severe since the early 1940s) and 2015–16.

It is important to note that the Demographic and Health Survey (DHS) – a source for ‘the hungry country’ – was conducted in 2016, 2017 and 2018. Food shortages associated with the 2015–16 drought and frosts extended from mid-2015 to mid/late 2016 (and into 2017 in some high-altitude locations in Enga and nearby places). Hence, it is unsurprising that the DHS found that many rural people were short of food in the 12 months prior to the survey.

While I disagree with the main conclusions of the ‘hungry country’ blog, it is a useful contribution that has raised some important issues, including the lack of recent high-quality statistical data on food production, consumption and related issues. Other changes in rural PNG that affect food availability and consumption, most of which are not well understood, include:

There are numerous causes of localised food shortages and several causes of widespread and often longer-lasting shortages in PNG. Despite this, most rural villagers have access to an adequate supply of energy (carbohydrate) foods for most of the time. I would never describe PNG as ‘a hungry country’.

The views expressed are those of the author only.

Techon Timess
We use cookies on our website to give you the most relevant experience by remembering your preferences and repeat visits. By clicking “Accept All”, you consent to the use of ALL the cookies. However, you may visit "Cookie Settings" to provide a controlled consent.
Cookie SettingsAccept All
Manage consent