Today, human sources are responsible for 60% of global methane emissions, coming primarily  from the burning of fossil fuels, decomposition in landfills and the agriculture sector. Nearly a quarter of methane emissions can be attributed to agriculture, much of which is from raising livestock. Rice cultivation and food waste are also important sources of agricultural methane, as nearly a third of all food produced for human consumption is lost or wasted.

Atmospheric methane concentrations have more than doubled since the Industrial Revolution because of intensive use of oil, gas and coal, rising demand for beef and dairy products and increased production of food and organic waste. Although the increase in atmospheric methane concentrations slowed appreciably near the end of the 20th Century, concentrations have been increasing substantially since 2006, likely as a result of rising emissions from raising livestock, renewed reliance on natural gas and, in recent years, wetlands and global warming.

NASA’s new 3-dimensional portrait of methane shows the world’s second largest contributor to greenhouse warming as it travels through the atmosphere. Combining multiple data sets from emissions inventories and simulations of wetlands into a high-resolution computer model, researchers now have an additional tool for understanding this complex gas and its role in Earth’s carbon cycle, atmospheric composition, and climate system. The new data visualization builds a fuller picture of the diversity of methane sources on the ground as well as the behavior of the gas as it moves through the atmosphere.

The Greenhouse Effect and Methane

Greenhouse gases, including methane, contribute to chemical reactions and climate feedbacks. The greenhouse gas molecules trap solar energy by acting like a thermal blanket. Energy from the sun is absorbed by Earth’s surface, though some of this energy is reflected into the atmosphere. The absorbed energy is also re-emitted at infrared wavelengths. Some of the reflected and re-emitted energy re-enters space, but the rest is trapped in the atmosphere by greenhouse gases. Over time, the captured heat warms our climate, increasing global temperatures.

The human-driven temperature increases can have an impact on methane released from natural sources. For example, permafrost can thaw naturally and emit methane into the atmosphere, but humans have increased the rate at which permafrost thaws due to human-caused warming.

However, the lifetime of a molecule of methane is shorter than a molecule of carbon dioxide because of natural chemical processes that are quicker at scrubbing methane out of the atmosphere than carbon dioxide. This means that if methane emissions were to decline and the natural chemical scrubbing of methane maintained, atmospheric methane could decrease dramatically in just ten years. Decreasing the amount of methane put into the atmosphere could have a significant and nearly immediate impact on reducing the near-term effects of climate change and may contribute to keeping global temperature change below 2-degrees Celsius.

Cattle, such as dairy cows or beef cattle produce methane as a by-product of digestion. Cattle are ruminant animals, meaning they have specialized digestive systems that allow them to process foods that cannot be digested by humans and most other animals, like fresh grass and uncooked grain. When food enters a bovine’s stomach, it undergoes a process called enteric fermentation: microbes and bacteria partially break down the food particles, which then ferment in the part of the stomach called the rumen. As the food particles ferment, they produce methane. Every time cattle belch – and, to a smaller extent, flatulate – methane is expelled and enters the atmosphere, where it acts as a greenhouse gas. 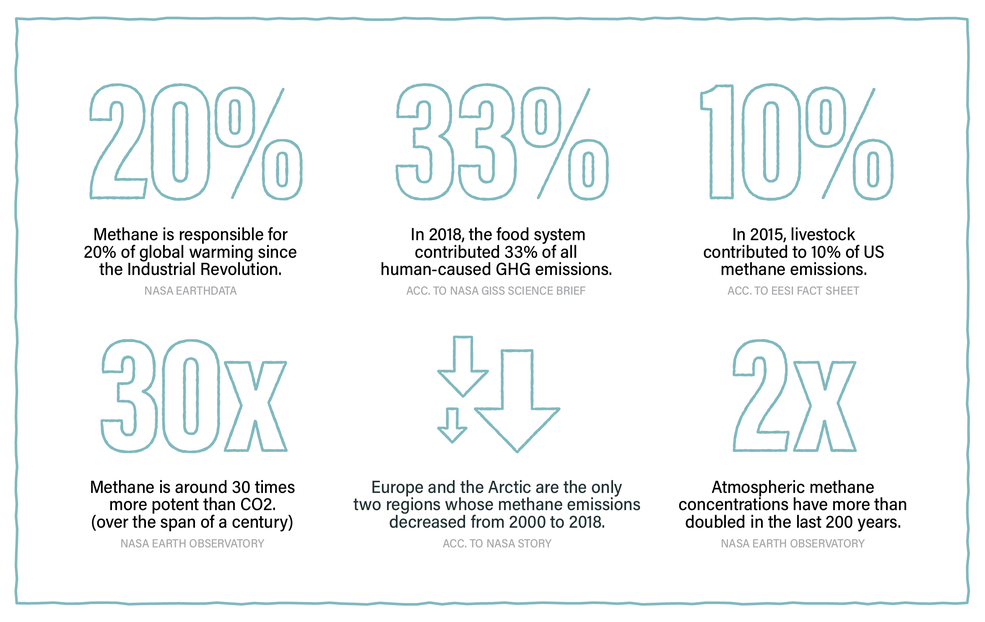 Methane fast facts: Methane is responsible for 20% of global warming since the Industrial Revolution; In 2018, the food system contributed 33% of all human-caused GHG emissions; In 2015, livestock contributed to 10% of US methane emissions; Methane is about 30 times more potent than CO2 over the span of a century; Europe and the Arctic are the only two regions whose methane emissions decreased from 2000 to 2018; Atmospheric methane concentrations have more than doubled in the last 200 years.

While methane concentrations are well observed, emissions have to be inferred based on a variety of factors. NASA scientists use a variety of methods to track methane emissions. To get the most accurate estimates possible, they use emissions inventories from countries around the world, simulate wetland methane emissions, and combine this with ground-based, airborne and satellite data using atmospheric models.

In California (and some other regions), researchers fly aircraft equipped with NASA’s Airborne Visible Infrared Imaging Spectrometer – Next Generation, or AVIRIS-NG, and collect highly calibrated data. This data is used in the California Methane Survey, a project jointly funded by NASA, the California Air Resources Board and the California Energy Commission to rapidly identify and report methane leaks.

In Alaska and Northwestern Canada, NASA researchers use satellites, aircraft and field research to better understand methane emissions from thawing permafrost as part of the Arctic Boreal and Vulnerability Experiment, or ABoVE. Researchers have discovered that carbon-rich permafrost is thawing at increasingly high rates, likely as a result of human-induced climate change, making the Arctic an important potential source of methane emissions. According to scientific estimates, this region’s soils store five times more carbon than has been emitted by all human activities in the last 200 years.

NASA researchers combine the data from missions like ABoVE and the California Methane Survey with their knowledge of how methane behaves in the atmosphere to create methane computer models. These models can help scientists and policy makers understand past, current, and future atmospheric methane patterns.

Researchers in a variety of fields have looked into potential solutions to decrease global methane emissions. For example, biogas systems reduce methane emissions by transforming waste from livestock, crops, water and food into energy. Biogas is produced through the same natural process that occurs in landfills to break down organic waste. However, biogas systems harness the gas that is produced and use it as a clean, renewable and reliable energy source rather than let it release into the atmosphere as a greenhouse gas.

A study led by Professor Ermias Kebreab from the University of California-Davis discovered that introducing a few ounces of seaweed into beef cattle diets could reduce their methane emissions by over 82%.

These types of technological – and biological – innovations may provide decision-makers, ranchers and others with more options for managing our future methane.

Education Tips
We use cookies on our website to give you the most relevant experience by remembering your preferences and repeat visits. By clicking “Accept All”, you consent to the use of ALL the cookies. However, you may visit "Cookie Settings" to provide a controlled consent.
Cookie SettingsAccept All
Manage consent