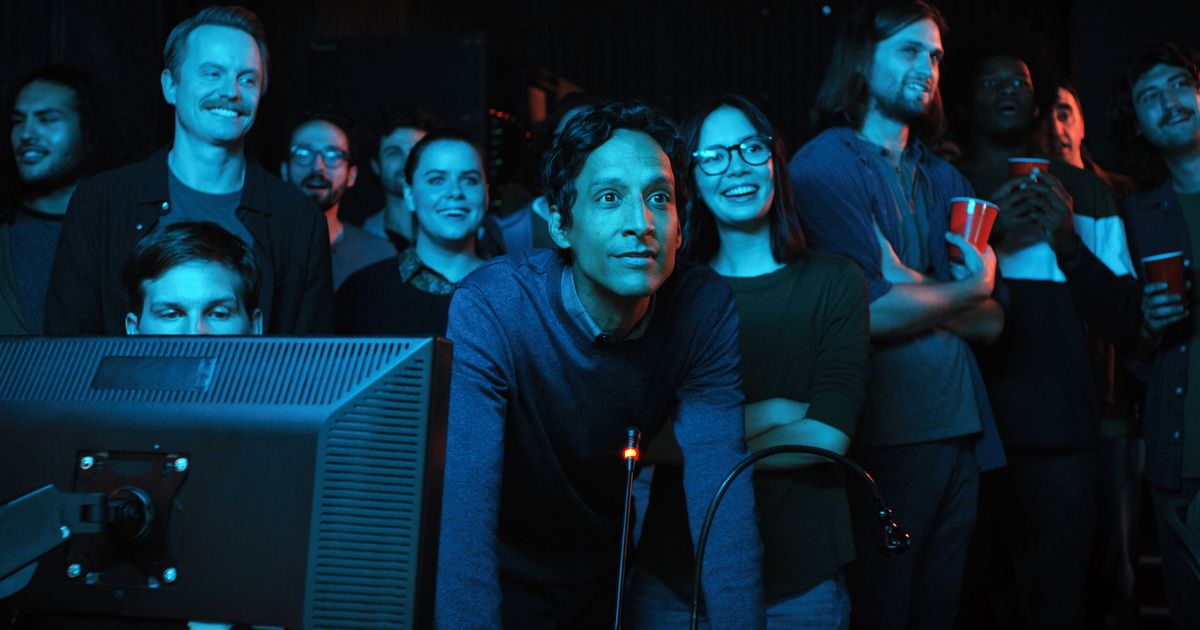 Brad is the closest Mythic Quest has to a villain. He’s the soulless money guy, the cool, ruthless schemer with no interest in nerdy fantasy games besides how they can make him money. Back in “Everlight,” he competed in a LARP battle solely because winning meant he could do away with a dorky but harmless tradition. When he (temporarily) succeeded, he even said, “I guess sometimes evil wins.” But last episode showed Brad actually being altruistic for once, helping David land a date, and “Breaking Brad” finally gives us an insightful piece of his backstory.

At the beginning of the episode, Brad is celebrating his recent success with battle royale, which is bringing in tons of cash. But Brad’s mellow is swiftly harshed when David comes in with a birthday cake. At first, his insistence that it isn’t his birthday seems like a panicked lie, a reaction to insecurity about his age. But we quickly learn the truth: David found out about Brad’s supposed birthday from his brother Zack, a “private-equity douche who swoops in, fattens up companies, and then guts them.” Zack’s here in the office today, ostensibly to surprise Brad for his birthday, but really for some more nefarious reason. “I bet he’s here to kill my pig,” Brad speculates, storming through the office with Jo. “I won’t let him. This is my pig. If anyone’s going to kill it, it’s going to be me.”

But if Zack is as evil as Brad says he is, he’s good at hiding it. He immediately ingratiates himself with the office, winning David over by showing empathy for his divorce trauma and assuring him that Brad’s probably acting suspicious because he’s still mad about Kate, presumably a woman the two brothers fought over once upon a time. Even Poppy, who Brad manages to persuade to be mean to Zack, quickly changes her mind when he calls her the genius behind battle royale. By the time Zack brings in Snoop Dogg for a private performance doubling as an in-game concert to sell Snoop skins to players, Brad seems hopelessly outmatched.

Maybe the only choice left is to appeal to their brotherly bond. When they get a private moment together, Zack confirms that MQ is a goldmine right now, and he intends to sell it off before it loses value. “You have all these folks convinced that you’re some badass cutthroat. But all I see is a scared little boy,” Zack says, suddenly colder than we’ve ever seen Brad. “A pussy, just like Papa always said.”

Brad asks Zack not to take his game away from him, even resorting to pleading. “Please, bhaiya,” he begs. “Please don’t kill my game.” It’s surprisingly moving — and downright jarring — to see him so vulnerable.

“We’ll see,” Zack says right before he heads for the door. “Happy birthday.”

While Brad is too busy protecting his “pig” to relish his and Poppy’s recent win, Poppy is happily reaping the rewards. Montreal has rewarded her with a Porsche, so she enlists Dana to give her a ride to pick it up — meanwhile, Rachel gives Ian a ride to take the Porsche himself.

It’s a smart choice to build on the new partnerships established last episode, pairing each tester with a creative director. Poppy’s mentorship of Dana isn’t going well; instead of teaching her to code, for the past two weeks she’s been using her more as a personal assistant. When called out for the poor optics of referring to Dana as her “chauffeur,” Poppy rationalizes, “I’m a woman of color, so I can’t get canceled, can I?”

Ian and Rachel are bickering, too, but they’re also learning from each other. On their drive together back to the office — it turns out only Rachel has the stick-shift skills to drive the Porsche — Rachel vents about her relationship anxieties, while Ian advises her to think less about Dana’s goals and more about her own.

That’s easy for a straight white man to say, sure. But to Rachel’s surprise, Ian is totally aware of his privilege. He’s just also aware that anyone needs to really hustle to get far in this industry. He tells her about how, as a tester, he found himself in an elevator with his boss and pitched a bunch of ideas. It showed his initiative, and six months later he got promoted. His point, of course, is that this Porsche is Rachel’s version of the elevator; this is her opportunity to tell her boss what she wants. But Rachel freezes, totally unable to think of something to pitch. Eventually she decides that she wants a seat at the table — she just doesn’t know what role she wants there.

The episode ends with a perfect parallel to tie these stories together: Jo, having overheard the conversation between Brad and his brother, slips into an elevator with Zack, who knows she’s curious about this mysterious Katie. He explains that as kids in 4-H, they were given a piglet named Katie to raise for slaughter. Brad got attached and couldn’t go through with it, so Zack did it for him.

“Brad’s balls just never dropped,” Zack says. “But I think yours have. I’ll be in touch.”

Beneath the surface of “Breaking Brad,” this is an episode about three young women in entry-level positions who are contemplating what futures they want, and how they can attain them. Jo knows she can only learn so much from a secret softie like Brad, and is bold enough to seek out someone who can offer her more. Dana knows she wants to code, but her biggest inspiration keeps letting her down. And Rachel doesn’t know what she wants at all. As successful as “Breaking Brad” is at deepening its titular character, it’s the story of these three women — divided in their goals, but united in their desire for something more out of their careers — that makes this episode an early standout of season two.

• Zack is played by Parvesh Cheena, best known for his roles in Outsourced and Crazy Ex-Girlfriend. Zack is a startling contrast to those other characters, who were the complete opposite of threatening. But Cheena totally pulls it off.

• Dana explains her early-morning errands for Poppy by saying, “You gotta work twice as hard to get half as far.” “Twice as hard as what?” Rachel asks, receiving a bemused “never mind” in reply. It’s a smart, subtle way to emphasize Rachel’s own privilege, relative to her girlfriend.

• “Where the fuck’s my sweet-and-sour sauce?” Poppy barks from the car. The sheer fury with which Dana shrieks “They’re in the cupholder!” cannot be captured in words.

• I love the decision to linger so long on Ian as he continues to sputter various reasons for not being able to drive the Porsche. The best is that Ian’s legs are “too strong.”

• Poppy compares her mentorship methods to Mr. Miyagi from Karate Kid. It’s rare that Poppy is the one making a reference, instead of failing to grasp someone else’s.

• The biggest laugh of the episode is when Rachel stalls for time by saying “I have to watch the road,” and the camera cuts to the Porsche rolling slowly through the parking garage.

• Zack reminds David to send him the Brené Brown links, a callback to “Everlight.” “She’ll change your life!” David assures him.

• Snoop Dogg’s in-game performance, shown to us during the credits, is a direct reference to Travis Scott’s Fortnite concert.

Keep up with all the drama of your favorite shows!


By submitting your email, you agree to our Terms and Privacy Notice and to receive email correspondence from us.

Science Technology News
We use cookies on our website to give you the most relevant experience by remembering your preferences and repeat visits. By clicking “Accept All”, you consent to the use of ALL the cookies. However, you may visit "Cookie Settings" to provide a controlled consent.
Cookie SettingsAccept All
Manage consent