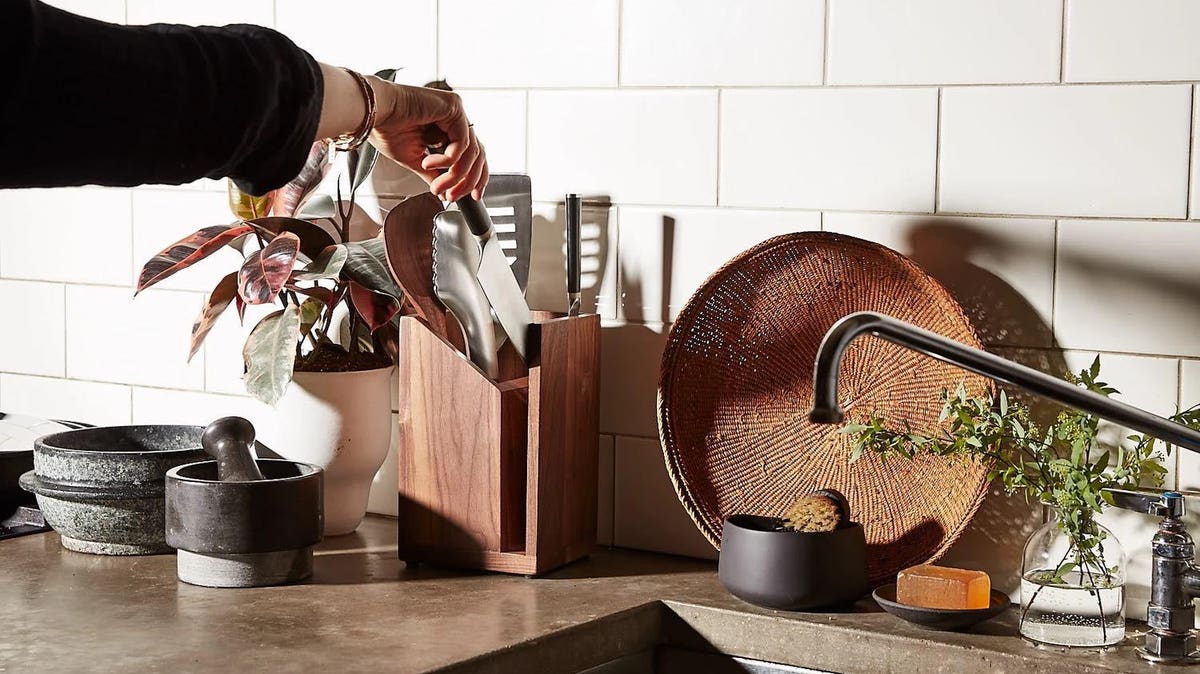 Under The Radar is our monthly column where we highlight some of the coolest, most inspiring founders of brands in the home and kitchen space.

The kitchen has taken on a whole new role of importance over the past two years. Never before have we so fervently wanted to bake bread, roast chicken, make our own jam or whip up a batch of cinnamon rolls from scratch. But along with this reinvigorated passion for cooking, there’s also been a need for cookware and kitchen tools that simplify our tasks, while simultaneously inspiring us. Which explains the sudden rise and popularity of Instagram-friendly DTC cookware brands. But Eunice Byun, co-founder of Material Kitchen, is interested in more than just capturing a block on your gram.

In 2018, while working as VP of global digital marketing at Revlon, Byun teamed up with her longtime friend David Nguyen (then the director of retail planning at Chanel) to explore the idea of performance-oriented, aesthetically elevated kitchen products. They began working weekends and putting in the extra hours to formulate a blueprint for a new cutting-edge kitchen brand that not only looked great, but also performed like a champ.

“[With] both of us being Asian American and having families where there’s so much love that happens around the dinner table—we both happen to love design too—it was a really nice, organic way for us to think about what these things could look like if we brought these passions into the kitchen,” says Byun. “This new era of consumer wants to find and use products that delight them. And I think that’s really what we’re trying to achieve for the home cook.”

Determined not to be pigeonholed as a one-product wonder, the duo launched with a collection called the Fundamentals: Two knives, four tools and a beautiful base to house everything together. “It was very aggressive to [launch] with that many items together, but our thinking was, ‘Let’s come out with something that serves as the core foundation for what every home cook wants, regardless of skill level,’” explains Byun.

The Marriage Of Form And Function

It wasn’t until their next two launches that the brand captured the millennial cook’s imagination: The Coated Pan and The ReBoard cutting board. Both items challenged the status quo, taking two of the most used kitchen items and breaking down design barriers to transform them into everyday essentials.

For example, the Coated Pan doesn’t use Teflon and is not a ceramic pan (like many other nonstick pans). Made from stainless steel alloy built around a copper core, the pan heats within seconds—and actually lasts up to 37 times longer than ceramic pans, according to the brand. It’s also nontoxic (no lead, no fumes), oven-friendly and dishwasher-safe. Best of all, it comes in a beautiful emerald green or sandy dune color.

The ReBoard is made from recycled plastic (collected scraps discarded by kitchenware manufacturing) that’s pulverized into smaller chips to create new material and mixed with renewable sugarcane for extra strength before being compressed into its new form. The end result is an incredibly durable (and attractive!) cutting board that also doubles as a serving board.

The brand has since grown its roster to launch more kitchen tools, utensils and tabletop accessories. Everything is designed in-house using thoughtfully sourced materials, and the team spends months testing prototypes in their own kitchen before releasing it to their customers. “We take this marriage between form and function very seriously, because you’re going to know if something is, no pun intended, a flash in the pan,” says Byun. “Our approach has constantly been: How can this feel like a practical indulgence? And that’s something we hold true and try so hard with every new product, and it shows in the way we’ve built our assortment that we aren’t a one trick pony.”

On Being An Asian American Founder

Unlike several other DTC cookware brands that are closely intertwined with their founders’ stories, Byun originally chose to stay out out of the spotlight while the brand’s identity took center stage. “I think sometimes as Asian Americans we’re comfortable with saying, ‘It’s okay, we don’t need to be at the forefront,’ and really be loud about what it is that we’re building,” explains Byun. “But somewhere along the way, we recognized that we should be giving voice to our story. We have unique experiences that are worth sharing and that people can connect to, and I’ll say that it’s been so rewarding to hear from people who can just relate.”

The brand is not only breaking cultural barriers, but also setting a new standards for DTC businesses giving back to their communities. Material Kitchen regularly launches special capsule collections and new colorways to support various causes, including Drive Change and Heart of Dinner. “We’re really proud of the journey we’ve had thus far because we’ve learned how to let people into our thinking and really understand the work that we’re doing,” says Byun. “We want to build a company that reflects our values and things that matter to us, and that goes beyond just the products we’re selling.”