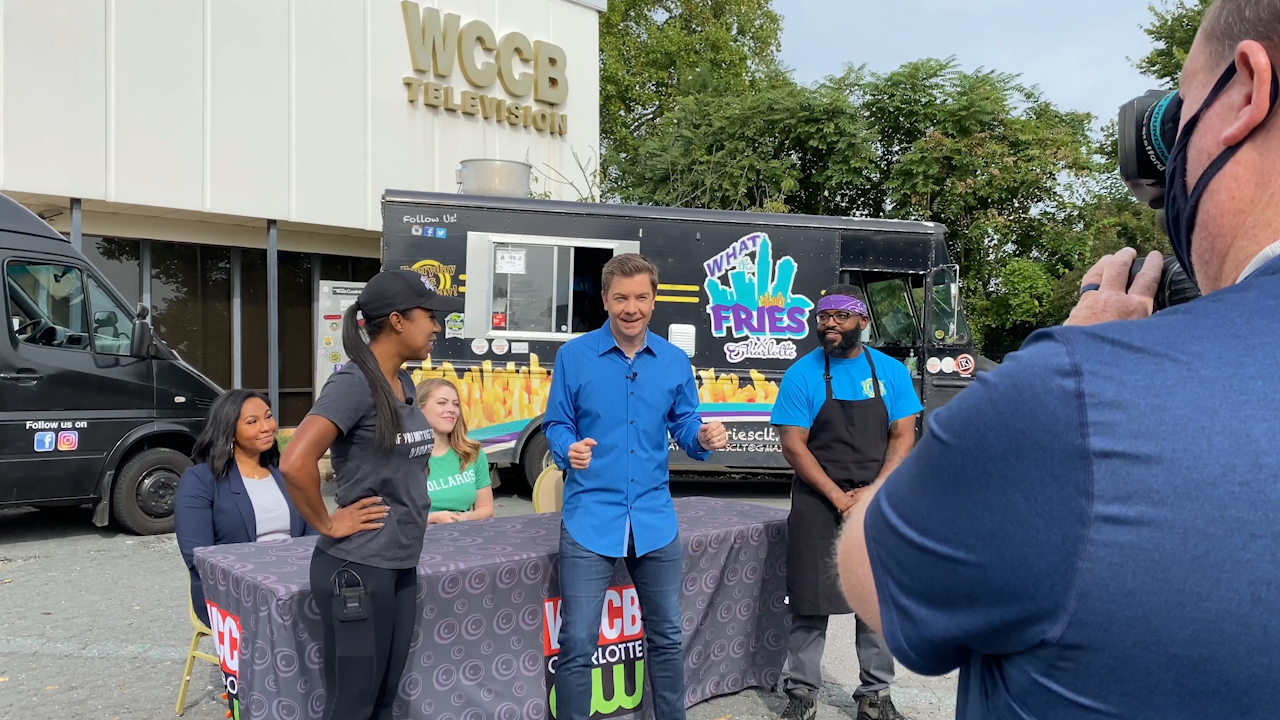 Nacho Average Truck pulls up to Rising so owner Ashley Troxler can teach the crew how to make a delicious plate of nachos:

What the Fries Food Truck – Chef Jamie Barnes and chef Gregory “Greg” Williams, former Johnson & Wales classmates turned roommates, best friends and business partners made it to the final round of auditions for Food Network’s “The Great Food Truck Race” using the truck name “What the Fries” in 2014. Although they didn’t make it onto the show, they continued pursuing their dream of building a food truck serving gourmet fries. Launching What the Fries as a catering company in July 2014, they then hit the road as the food truck we know and love in August 2015.  With the success of their truck, in March 2021 they launched their brick and mortar location at 10707 Park Road, Suite F Charlotte.

Jess Bentley – Slice of Jess @sliceofjess
A self-taught chef who’s cooking & eating her way through the Queen City of Charlotte, North Carolina. She grew up in the San Francisco Bay Area and moved to Charlotte in 2013. Since then, she has been roaming around the city exploring the booming culinary scene and discovering new ingredients for her home cooked meals.

Julia Forbes – @Chomp.able chompable.blog
Julia is the founder of CHOMPABLE, formerly CLTCHOMP, a food blog focused on highlight small and unique businesses in NC and beyond. She is a content creator and online personality that loves to do TV, video, and photography focusing on all things food.

Lorri Lofton – @lorriashly
Lorri creates, hosts, and covers events in the city of Charlotte, NC and Greenville, SC including but not limited to menu tastings, grand openings, networking events, and red carpet events. She created Charlotte’s first Brunch Festival. This will return Fall 2021.

*SPOILER ALERT* scroll past if you haven’t seen the episode yet!

And the winner of the Golden Spork is….

Healthcare Technology Trends
We use cookies on our website to give you the most relevant experience by remembering your preferences and repeat visits. By clicking “Accept All”, you consent to the use of ALL the cookies. However, you may visit "Cookie Settings" to provide a controlled consent.
Cookie SettingsAccept All
Manage consent