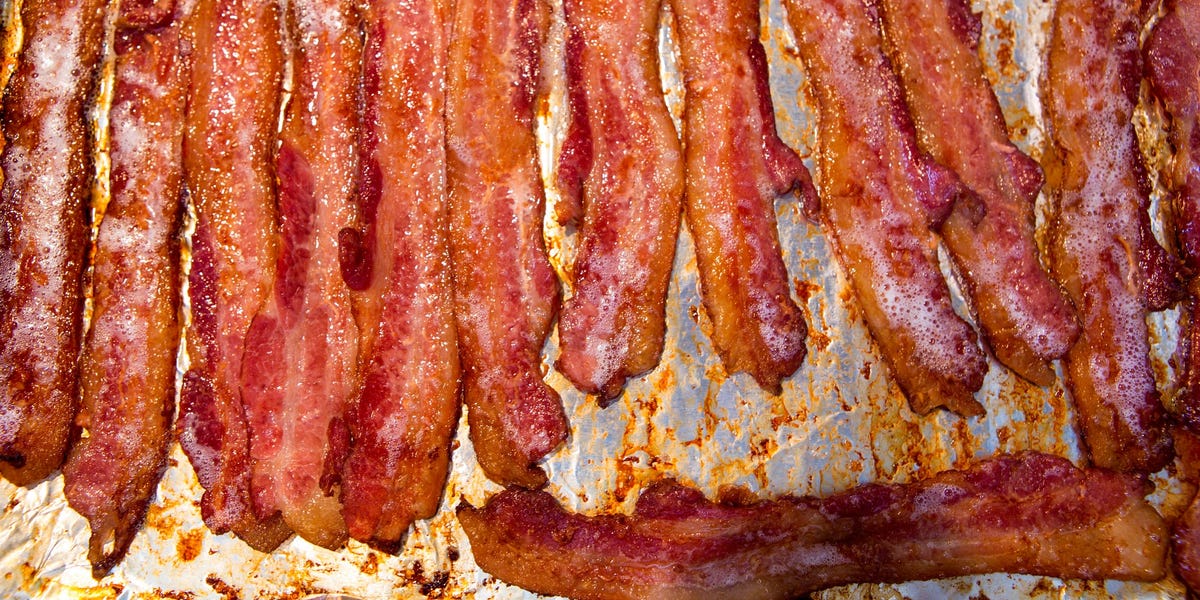 To cook bacon on the stovetop or in the oven, that is the question.

If you ask Cara Tobin, executive chef-owner of Honey Road restaurant in Burlington, Vermont, the answer is bacon in the oven. “It’s way easier for me, especially if I’m making a full breakfast, to throw the bacon in the oven and not have to think about it,” says Tobin, who feeds a family, adding that oven-baking simply just saves time and energy.

Why the oven is better than the stovetop

If you’re used to cooking bacon in a skillet on the stove, you know it can get messy, fussy, and, and time-consuming. Here’s why you should consider baking oven instead:

How to bake bacon

This method works especially well with medium-cut bacon, rendering it extra crispy and snappy. But, it can work for any kind of bacon you’ve got. Exact cooking times will depend on the thickness of the bacon.

Quick tip: Allowing your bacon to start in a cold oven helps render the fat. Because it comes to temperature more slowly, the fat renders off more efficiently leaving you with extra-crispy bacon.

What to do with leftovers

Bacon leftovers aren’t all that common for most of us. But, it can happen. In that case, wrap it in foil, place it in a plastic bag, and store it in the fridge. “Use it in salads, chop it into scrambled eggs, toss it into pasta. You can always find somewhere to put bacon,” says Tobin. If you want to reheat it, spread it on a plate and microwave it for 30 seconds.

What to do with bacon grease

Regardless of your cooking method, you’ll probably end up with some bacon grease. This could either feel like a pain or like a delightful opportunity — bacon grease adds a rich meaty flavor to even the simplest dishes.

Once it’s cooled, scrape the grease into a small container with a lid and use it to sauté greens, fry eggs or bread, or even to bake with. Next time you’re making chocolate chip cookies, replace half the fat that’s called for with bacon fat. Store the bacon fat in the fridge for up to three months or freeze it indefinitely.

If you’d rather dispose of it, wait until it’s cooled, then scrape it into a non-recyclable container or plastic bag. If you’d really like to go the extra mile, take a permanent marker and label it, “Cooking grease. Non-recyclable.” Then, throw it away and pat yourself on the back for being a responsible citizen. Don’t pour it down your drain or it could clog up your pipes as it cools and solidifies.

Unless you’re charmed by the idea of standing over the stove, flipping your sizzling bacon, you may as well cook bacon in the oven. Just make sure to watch it more closely if you’re working with especially thin-cut or sweeter bacon and to let it rest on paper towels or a brown paper bag for a moment before serving. You’ll never go back.

Digital Health Trends
We use cookies on our website to give you the most relevant experience by remembering your preferences and repeat visits. By clicking “Accept All”, you consent to the use of ALL the cookies. However, you may visit "Cookie Settings" to provide a controlled consent.
Cookie SettingsAccept All
Manage consent