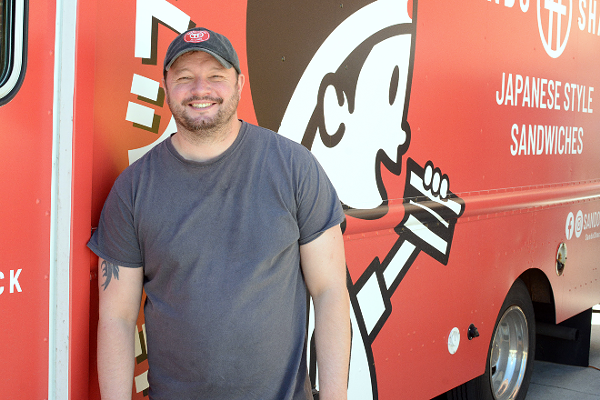 Dan Jensen remembers the experience that gave him the bug for the food and beverage business well. Growing up in Chicago, he was intrigued by his two uncles who were chefs, so he jumped at the chance to work alongside one of them at the city’s annual food festival when the opportunity arose. Though that decision was made almost on a whim, it would set in motion the career path that led him to where he is today.

“When I was seventeen years old, my uncle asked me if I wanted to work with him at Taste of Chicago in Grant Park,” Jensen recalls. “It sounded like a good time, so I said sure. It ended up being really cool, and I liked doing it. After I graduated from high school and went on to college, it just stuck with me, so I started working in restaurants.”

Jensen traces a fairly straight line between that one-off food festival gig with his uncle to Sando Shack, the Japanese sandwich food truck he owns with his partner, Amy Guo. As he explains, once he got into the business after that event, he never left, working everywhere from Chicago and Houston to Miami and Seattle. Throughout his mainly front-of-house career in the industry, he’s built upon that initial passion that struck him, developing a true appreciation for all that goes into running restaurants and hotels.

That’s why he wanted to open his own business. Having managed restaurants and a food hall, he and Guo were looking to go into business for themselves. At the time, they were living in Seattle after relocating for Guo’s job in marketing and public relations. Eager to strike out on their own, they quickly became discouraged by how cost-prohibitive such an endeavor would be in that city. They knew that their dreams would likely not come to fruition in Seattle, but they weren’t ready to completely throw them out the window.

“We started looking around in St. Louis and someone gave us a broker’s name who told us about the City Foundry project,” Jensen says. “It looked cool and seemed like there was so much potential in it. It sounded like they were doing all this next-level stuff and that it was going to be great when it opened.”

Jenson and Guo decided to sign on for a stall at City Foundry and knew right away that they wanted to do poke. Living in Seattle with what seemed like a poke spot on every corner, it was a staple of their diet and they figured that the market in St. Louis had room for such a concept. Full steam ahead, they made plans to move to town as soon as the project got close to opening. However, delay after delay kept pushing back their timeline, until one day, they got the green light that things were heating up. Jensen quit his job, and he and Guo moved to St. Louis thinking that they were on the cusp of opening. Then, they got hit with another stall.

“We moved here last July thinking it was going to open, and as soon as we got here, we found out it wasn’t going to,” Jensen says. “If they would’ve told us ten days earlier, we might not have moved, but here we were trying to figure out what we were going to do with our time.”

Jensen and Guo did not want to sit around idly and wait for City Foundry to open. They couldn’t. He had quit his job, and she had got laid off from hers, making income a necessity. Determined to find a way to make ends meet, they came up with the idea of doing a pop-up based around Japanese sandos, another style of food they enjoyed eating in Seattle. After getting great feedback and developing a following, they decided to go all-in on the concept, and launched a food truck in April of this year.

Jensen is thrilled with Sando Shack and plans to keep it going even when he and Guo’s poke spot, Hello Poke, opens in City Foundry (assuming he can find enough staff to work for both concepts). Though he admits he didn’t initially see himself as the owner of two different restaurants right out of the gate, he’s excited to see where this all takes him.

“If I have my choice, I will continue to do both, because I think they will compliment each other,” Jensen says. “Right now, though, we’re just having fun. The important thing is that people really seem to be enjoying our food, so that’s what matters.”

Jensen took a moment away from Sando Shack to share his thoughts on the St. Louis restaurant community, his love of food from far-flung lands and why communication is key to a great restaurant experience.

What is one thing people don’t know about you that you wish they did?
I love to travel and learn about new and different cuisines. Growing up, I watched some family members in the food industry, but it wasn’t until I left my home in Chicago and traveled to different cities in the states and internationally that I started learning about all the history, culture and unique flavors of different foods.

What daily ritual is non-negotiable for you?
Coffee and planning out the day.

Who is your St. Louis food crush?
One of my favorite dishes that I’ve tried so far is the “Chicken Cooked in Yogurt” from Lucky Accomplice. Will need to go back again soon!

Which ingredient is most representative of your personality?
I’m not sure if it represents my personality, but I do love cheese. Maybe pepper jack cheese because I can really go with the flow on anything, but I got a little heat too.

As a hospitality professional, what do people need to know about what you are going through?
Food product, quality and availability. Food product prices have increased due to lack of product availability, so it has been more of a challenge to get the quality of product that we want for the right prices — and now, the shortage of staff is an issue.

What do you miss most about the way you did your job before COVID-19?
Being social, and giving handshakes and hugs to our friends and customers. Meeting new people and engaging with our customers are both very important to us, so we can’t wait to gather together again in a safe environment.

What do you miss least?
Heavy traffic.

What have you been stress-eating/drinking lately?
Ice cream.

What do you think the biggest change to the hospitality industry will be once people are allowed to return to normal activity levels?
The level of communication and transparency between the businesses and its customers. Since the pandemic, businesses have over-communicated about what they’re doing and how they’re taking the proper precautions of keeping their customers and staff safe and healthy — which is great. We believe that this level of communication and transparency should stay a consistent goal, even after normalcy returns.

What is one thing that gives you hope during this crisis?
This community and the amount of support we see everyone giving each other. From trying each others’ foods, offering help, to spreading the word through advertising, collabs, and social media, this community has shown that working together is the key to getting through a crisis like this.

Business Magazine
We use cookies on our website to give you the most relevant experience by remembering your preferences and repeat visits. By clicking “Accept All”, you consent to the use of ALL the cookies. However, you may visit "Cookie Settings" to provide a controlled consent.
Cookie SettingsAccept All
Manage consent