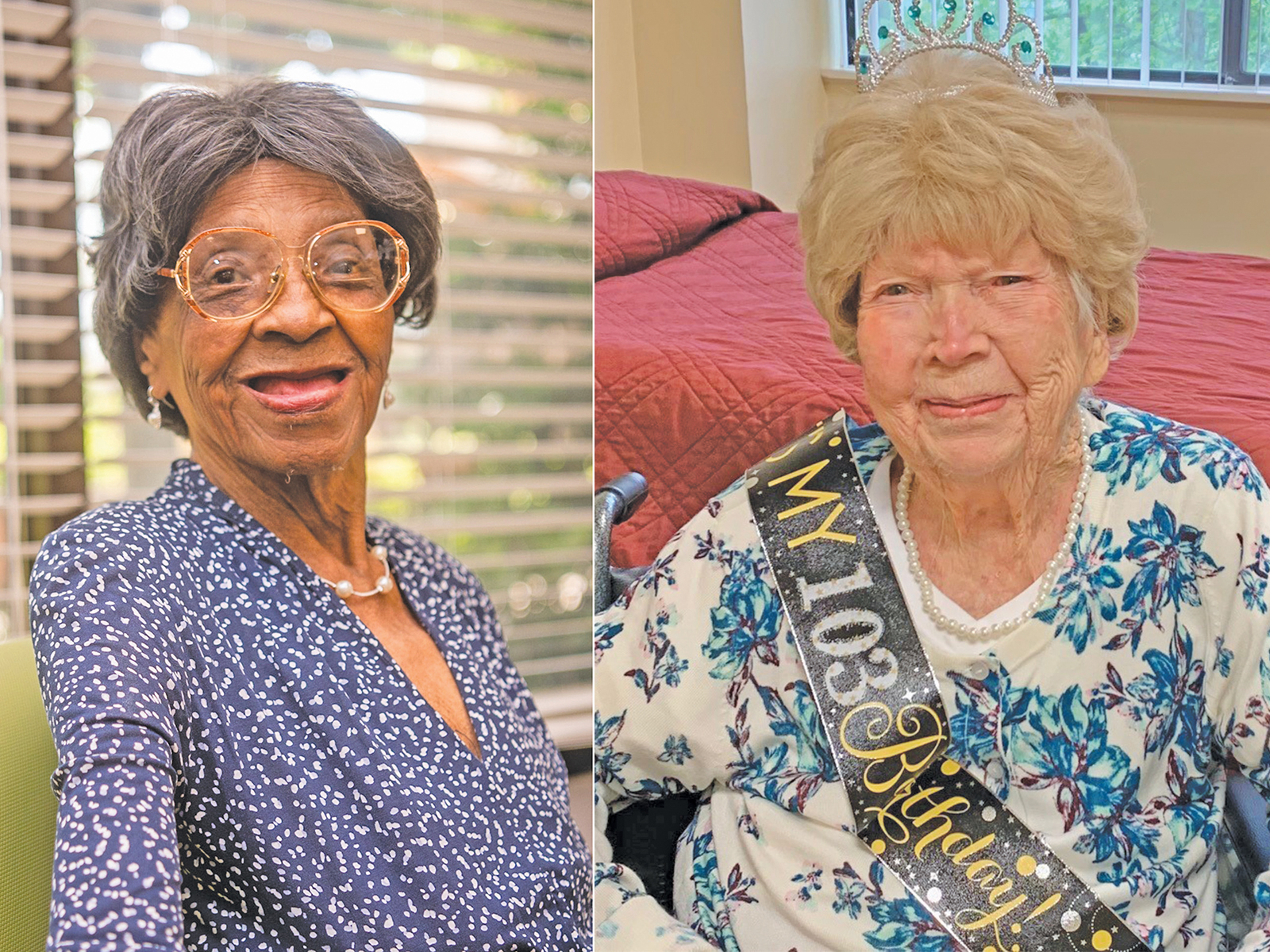 Rosie Dillard Dixon and Mamie Lee Norman both reside at Princeton Towers, a senior apartment complex, in West Birmingham. Both have common traits: love for God, family, and cooking, according to Princeton Towers Service Coordinator Janet Graham. Both have lived a century or more—Norman is 102, and Dixon is 100.

A third resident, Pearl “Granny” Shepherd Porter, lived to be 107. She recently passed on August 20.

Centenarians in the Birmingham metro area are making a difference and serve as inspirations. Here is a closer look at some:

Around Princeton Towers, Norman is known to say what’s on her mind.

“[She’s] very strong willed. She will definitely speak her mind,” said her granddaughter, Pam Steele. “If she doesn’t like something, she will for sure let you know.”

Besides being the “voice of reason” around Princeton Towers, Norman has always been a strong supporter of her family. She has one child: Charles Steele; three grandchildren: Robert, Karen, and Pamela Steele; and one great-grandchild: Tyler Brown.

Her secret to longevity is being selfless and helping others.

“Her longevity is due to always helping others in need,” said Steele. “When she was able to, she would cook so many meals for people in the building.”

Norman was born August 2, 1919, in Birmingham, Alabama, to Estelle and Curtis Norman. Her family has lived in Jefferson County most of her life. The A.H Parker High School graduate is “proud” to be a product of the Birmingham City Schools system.

Norman has lived in the first building of Princeton Towers since 2000 and once served as a volunteer at Princeton Hospital in the 1990s.

Known for being a “sharp dresser,” Ms. Norman is always “dressed up,” said Steele. “She loves to shop, and [her] shoes and purse have to match every outfit.”

With her ongoing commitments to family, friends, and her community, Norman exemplifies the ideas of good citizenship and service to God as a member of Broad Street Baptist Church in Birmingham.

Norman serves as a “special and constant source of love and inspiration” to all who know her, said Graham.

A woman of faith, Dixon said, “God is the sole reason” she is here to see 100. She then quoted her favorite Bible verse: “I can do all things through Christ who strengthens me,” Philippians 4:13.

Dixon’s motto is “Trust the Lord, and love one another,” and her family describes her as their “matriarch.”

“She loves to do for others,” said her niece, Dorothy Dixon. “If there is anything she can do for you, she will do it.”

Dixon was born on June 29, 1921, to the late Columbus and Dizzie Dillard in Lowndes County, Alabama. She moved into the first building of Princeton Towers almost 20 years ago, on Nov. 13, 2001. Throughout her lifetime, Dixon has seen many changes in her community and around the world.

Dixon enjoys spending time with her family and friends and uses her talents to enrich the lives of so many. She doesn’t have any children, but she puts her love and care elsewhere. In the past, she assisted her friends at Princeton Towers with washing clothes and cooking. She also served as the floor volunteer, checking on residents at Princeton Towers.

“She’s always been up and active,” said Princeton Towers Community Manager Tiffany Jackson. “She’s very homogenous, … very active in the community. [Princeton Towers] has different activities going on, and she’s always involved. She’s really open and alert to be 100, especially. If she has a problem, she’ll call. She communicates very well. [She’s] a very sweet lady.”

Staff at Mount Royal Towers, an assisted living facility in Birmingham, gathered to sing, “Happy Birthday” to Rogers on April 30, 2021, as she sat in her wheelchair in her room. She wore a Happy Birthday crown and a sash on her special day. Her room also was decorated with balloons, with three of them highlighting 103. She also had cake and a bouquet of flowers.

Rogers was born in Blount County’s Hayden on April 30, 1918. She worked as a cosmetologist and lived across the country with her late husband, who was in the military, but most recently lived in Homewood before moving into Mount Royal Towers earlier this year.

Rogers said most people think she is younger than her actual age. “They ask me what my age is, and they don’t believe me,” she said, “because I look like I’m 70.”

She often is asked what the key is to her longevity; she does not have an answer.

“Everyone asks me what my secret is, but I don’t know what it is,” she said. “I just take it as it comes.”

“I’m just going to go and be 104,” she added. “It’s wonderful to be on this beautiful earth. The most important thing in the world is to be with your family.”

Val Cornner, For The Birmingham Times

Celebrations were in order at Mount Royal Towers on August 24 because resident Berta Taylor turned 102.

With a pink crown on her head and wearing pearls, Mrs. Taylor enjoyed birthday cake, ice cream, and fruit punch as nursing home staff sang Happy Birthday. Her family provided her with gifts.

Mrs. Taylor was born in Jackson County and grew up on a farm, according to her daughter-in-law, Mary Taylor. She was the third oldest of eight children. She has a surviving baby brother, who is 90.

After World War II, Mrs. Taylor attended Jacksonville State University with her husband, and both received teaching degrees. Mrs. Taylor taught mostly English at the junior high school level. When she retired, she traveled, which was one of her favorite hobbies.

She has been living at Mount Royal Towers since 2016.

She outlived her only child, a son; she has two grandchildren and four great-grandchildren.

Val Cornner, For The Birmingham Times

Mrs. Porter, one of the oldest residents at Princeton Towers, passed away on August 20. She lived in the second building of the two towers for more than 21 years. She was a member of the knitting club and even had the nickname “Spider” because of her knack for knitting items like scarves and hats. She was also known for her cooking and baking skills (cakes and pies are among her specialties) and her love for chicken from Church’s and KFC.

A Homegoing Celebration was held for Mrs. Porter on August 28 at Church of God In Christ Bishop O L Meadows Cathedral, 5233 Bessemer Super Highway in Brighton.

The people closest to her called her “Granny” because she “provided such a comforting spirit, she made you feel loved and accepted,” said Janet Graham, Princeton Towers Service Coordinator.

Porter could “get down and “sing a tune,” too, said her daughter-in-law, Shevron Porter. “Some of her favorite songs were ‘Down Home Blues’ and ‘On the Battlefield for My Lord.’ If she started to sing those, … know that you were in for a treat.”

Porter remained active in and cared about her community until her passing. In fact, she “made sure” she went and voted in last year’s presidential election, said her daughter-in-law. Her home church was Forge Temple Church of God in Christ in North Birmingham, where she had been a member since 1952 and still served as church mother.

“I was proud to be a member when the grounds broke at Forge Temple,” said Porter in an interview earlier this month. “More proud to be a witness of God’s wonderful grace and mercy.”

Click one of the links below to read related stories.

UAB Geriatrics Expert on the Key to ‘Successful Aging’

The Tireless Work of Jefferson County’s Area Agency on Aging

At 104, Dr. Ora Mae Parker Still a Blessing for Others

Good Business For Beginners
We use cookies on our website to give you the most relevant experience by remembering your preferences and repeat visits. By clicking “Accept All”, you consent to the use of ALL the cookies. However, you may visit "Cookie Settings" to provide a controlled consent.
Cookie SettingsAccept All
Manage consent