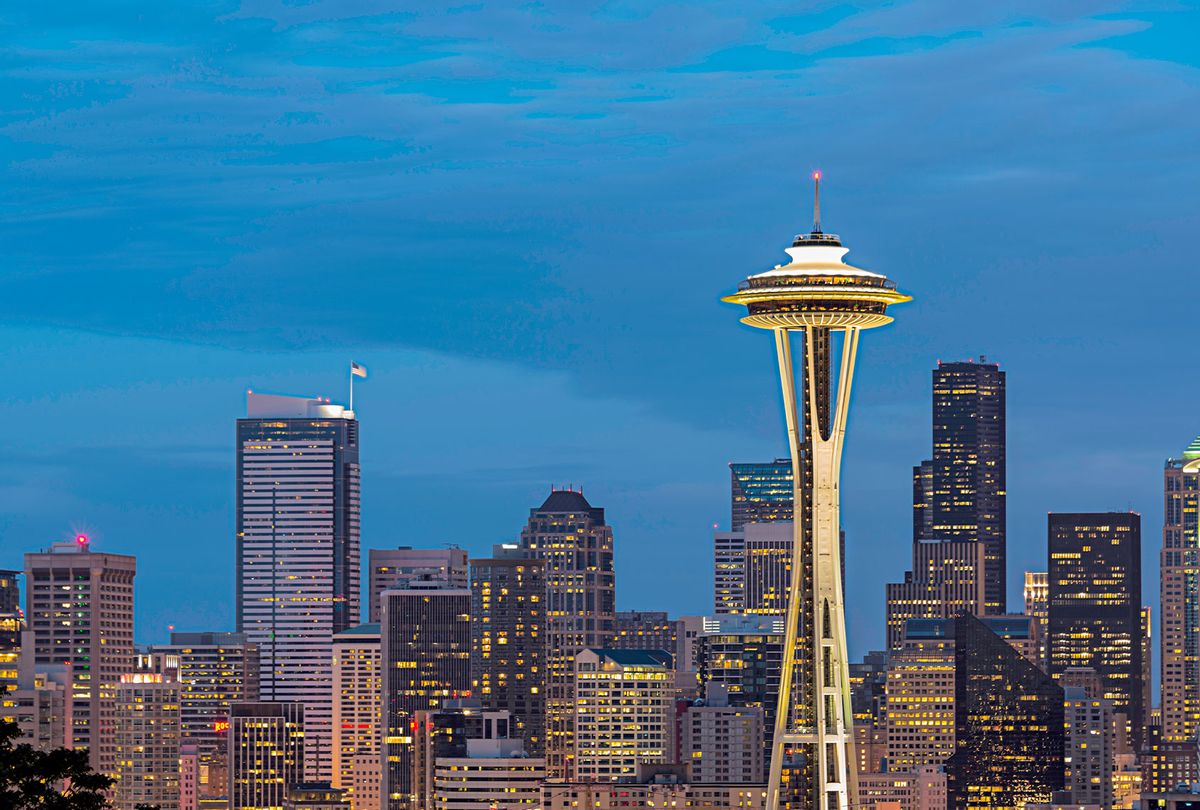 Seattle has some of the best restaurants in the country. A few summers ago, as I worked in New York and my partner worked in the Emerald City, I flew out to stay with him. We didn’t so much plan an itinerary as we planned meals — breakfast, lunch, and dinner; snacks between breakfast, lunch, and dinner — many of which were at Renee Erickson’s great restaurants. After cooking her recipes for years, one of my trip goals was to finally enjoy her food in person. And did we ever. But we also stumbled upon a lot of other wonderful eats. I spoke with my Food52 colleagues to get their takes on the best restaurants in Seattle, and here are our top 13 spots in no particular order.

Two brothers — Kit and Jesse Schumann — founded Sea Wolf in 2014. They started by baking in borrowed kitchens and, a couple years later, graduated to their own space. Lucky for us, it was a jog away from Justin’s apartment. The bakery’s kitchen is wide open, so when you walk in, you can see bakers loading dough into bins and pulling loaves from the oven. There’s sunshine everywhere, thanks to the four skylights, and even from the door it’s easy to spot the larger-than-life cinnamon rolls. They’re made from croissant dough scraps (!) and filled with butter, cinnamon, and raisins. “They’re an homage to the cinnamon rolls we ate as kids at Carol’s Coffee Cup in our hometown,” Kit told me. “When you are nine, they look as if they are as big as your head. And they might have been.”

Ellenos says its yogurt “starts with the pure, pasteurized whole milk we source directly from local farms that creates our signature velvety texture and slightly sweet taste.” But that’s not what makes it special. Apparently, it’s the family’s own blend of probiotic cultures. (What? Your family doesn’t have one of those?) This is what makes their ultra-thick Greek yogurt stand out. Ellenos lives in a pint-sized stall at Pike Place Market. You’d almost miss it amid the craze if it weren’t for the long line or hoards of people wandering around with swooshy, swirly, get-me-some-of-that yogurt. While they have a slew of flavors — lemon curd! passion fruit! marionberry! — the nutty, fruity, oaty muesli was my favorite.

General Porpoise does doughnuts and caffeine — nothing more, nothing less — and they do it really, really well. The doughnuts are yeast-raised, sugar-rolled, and filled with — well, that’s the fun part. Classics include vanilla custard and lemon curd. Wild cards could be anything from chocolate marshmallow to peanut butter and jelly. When Justin and I were there, it was a sweet-tart rhubarb jam. But the vanilla custard was our favorite, especially with a giant mug of coffee that lived up to all the Seattle hype.

You’re at Pike Place. You’ve seen the fish-throwing (just what it sounds like) and the gum wall (also just what it sounds like) and survived the original Starbucks crowds. You want lunch — ASAP, please — and Country Dough is the place to be. This spot specializes in guo kui, crispy stuffed flatbreads, perfect if you want to wander and eat. We got ours with chicken, but you could get pork, beef, or mushrooms and young bamboo shoots. We also got the Chinese crepe and hand-shaven noodle soup. Justin said ordering dumplings, too, would be overkill, which I’m still low-key salty about.

Currently, Country Dough is temporarily closed due to the impact of COVID-19.

5. The Walrus And The Carpenter

The Walrus and the Carpenter shucks anywhere between 100 and 140 dozen oysters every night. That’s 1,200 to 1,600 oysters — every dang night. Opened in 2010, this homey, lively space has a completely open kitchen surrounded by a bar, like having courtside seats at a basketball game. The oysters are so cold, they might as well have just been plucked from the bottom of the sea. The menu lists them from mildest to briniest, and the selection rotates regularly, depending on local farmer availability. Each one is served with freshly-grated horseradish, shallot-champagne mignonette, and lemon. We split too many (is there such a thing?) and said “Cheers!” before each one, clinking together the shells.

What to do while you’re waiting in line at The Walrus and the Carpenter? Go to one of Erickson’s other spots — right next door. They’ll even tell you when your table is ready. Barnacle “celebrates the Italian aperitivo bar in a jewel box space with wines by the glass and all things canned, pickled, smoked, and cured.” Which means a mean spritz and all the snacks to go with. Or, say, that giant jamón serrano on the counter, hand-sliced to order, and silky chicken mousse with amaro-pickled cherries. Or, my pick, boquerones — buttery white anchovies — drowned in olive oil and topped with smashed green olives and crispy bread crumbs.

Plan a trip to Seattle, ask around for recommendations, and inevitably someone will tell you that you have to go to Molly Moon’s. Its namesake and founder Molly Moon Neitzel opened her first scoop shop in 2008. Today, the brand has seven more. Expect classics like strawberries (made with local fruit), chocolate (made with melted chocolate versus cocoa powder), and salted caramel (“dares to be saltier than all the others!” according to the website). But I was holding up the line with sample after sample of flavors you can’t find everywhere: Earl Grey, honey lavender, and yeti (yep, yeti), which is made with granola, vanilla caramel, and chocolate bits.

Justin and I didn’t find Frankie & Jo’s. Frankie & Jo’s found us. We went to dinner one night, left the restaurant on the lookout for Molly Moon’s, and saw all these people wandering by with ice cream cones. Then, there was Frankie & Jo’s, a plant-based ice cream shop. Cherry Bombe recently called its co-owners Autumn Martin and Kari Brunson “the vegan ice cream world’s most influential duo.” And you only need one scoop to see why. I opted for Tahini Chocolate (salty tahini ice cream with chocolate ribbons and sesame fudge) and Gingered Golden Milk (turmeric and coconut milk ice cream with cinnamon, cardamom, and candied ginger). My sweet-pea got the beet, strawberry, and rose sorbet. I have a feeling there isn’t a bad flavor at this place, but the highlighter-neon Golden Milk totally swept me off my feet.

Kaleigh Embree, Food52’s Customer Care Specialist, is a fan of this low-key French restaurant located in the First Hill neighborhood. A friend of mine who lives in Seattle told me I need to come visit for this place because “When the atmosphere, staff, and food are all at the same amazing quality, then I know I’ve found my new favorite haunt.”

When Ace wants a Caribbean-inspired bite, he heads to this Seattle restaurant and tiki bar with two locations in the city. His go-to order is the sautéed prawns sandwich, which features black tiger prawns sautéed in garlic tapenade and served with fresh cilantro, pickled jalapeños, caramelized onions, and crisp romaine lettuce.

“I dream about the roti jala net bread at Kedai Makan,” says Larissa Sanz, Brand Manager of Five Two. “This is hands down one of the top five dishes I’ve ever had in my life. I cannot find this dish anywhere in NYC. I re-created it recently after a ton of research, but it didn’t compare to this restaurant’s version. If I return to Seattle anytime soon, this will be stop #1.”